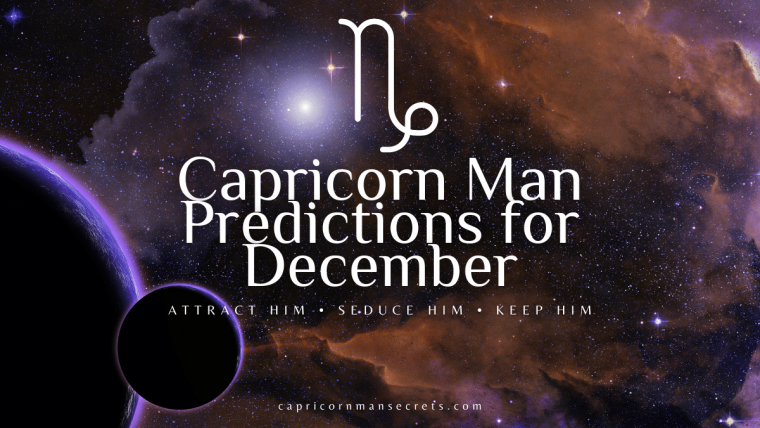 Hello, darling readers! It’s the season of cozy blankets, warm cocoa, and… end of year predictions! You’re in the right place to see how your Capricorn guy will fare this December, so let’s jump right in!

During the first week of December, the Capricorn man will love to go out and have some fun on romantic dates. If anyone asked him, he would tell you that the holiday season is the most romantic season of them all.

The second week puts pressure on him to reexamine his daily habits, routines, and work relationships. This can prove to be a highly stressful time for the Capricorn man, which is why it’s a good idea to pamper him in some way. Be there for him, and he won’t forget it for a long time.

The third week is a good preview of what’s to come in the fourth week of December. Now is a perfect time to go on a short vacation, or to spend your days somewhere warm and cozy while eating roasted marshmallows and drinking hot chocolate.

The fourth week is the promised land for the Capricorn man. There’s a Super New Moon in Capricorn and that is going to make him not just glow-up but also chase his dreams with new confidence and fervor. This is his time to shine, and he should manifest the load out of it! I’m rooting for him, and so should you, with all your might.

During the first week of the last month of 2022, the Capricorn man is going to feel a lot of unfamiliar optimism coursing through the back of his mind; that’s thanks to a mini-stellium in his twelfth house. Now is a great time for prompting him to invest more thought in his ideas, and to take his own goals more seriously, for now, this is the time for his wishes to come true.

His communication style might be more on the romantic and esoteric side as well. Thanks to the Neptune Retrograde in conjunction to Jupiter in his third house. His love life is also being activated during this time, so it’s a good time to go on romantic dates that include a little bit of holiday spirit.

The Capricorn man might seem serious and cold on the outside most of the time, but he’s really a big softie on the inside. There’s probably no one alive who knows how much he loves the Christmas carols and all this mumbo-jumbo that comes with the busiest season.

This is why I’m giving you insider’s info, use it well and use it to your advantage – take him out to a holiday fair, and let him enjoy all the lights and cookies you find along the way. Try and talk him into a bit of holiday shopping, and you’ll see how his mood lights up.

Kindness Is Underrated In Today’s World…

The second week puts pressure on the Capricorn man’s sixth house of work and daily routines – there’s a Full Moon conjunct Mars Retrograde in Gemini, and it trines his ruler, Saturn, in Aquarius. This lunation might trigger his inner fears about money, job, and colleagues – what do they think of him, and is he competent enough?

Everyone thinks that the Capricorn man has no fears, just because he seems so calm and collected all the time when the reality is far from it. He’s one of the more anxious and worrying signs. This is why it’ll be a good thing for him to have more sleep during this period, and to soak in the hot bath with some oils and Epsom salts.

This transit offers a good opportunity to take his mind off his worries by doing something sensual, like buying new lingerie and seducing him in it. Baking cookies that will remind him of less worrisome times, like his childhood.

This is a perfect time to help him examine his daily habits and remove those that don’t serve him anymore and upgrade those that do. The Capricorn man is one of those signs that would rather die than ask for help, even when he’s drowning, so make sure he knows you’re there for him, and even though he won’t ask for help, you’ll be there to give it.

Read also: How To Keep A Capricorn Man Interested And Happy Even After The Honeymoon Phase

During the third week of the month, there’s a prelude to the feeling of the final week; the Capricorn man will have a glow-up and his words will be more charming and more direct, thanks to Venus and Mercury moving to his first house of self.

This week offers a great opportunity for travel as well. So, if your Capricorn guy has planned his holidays accordingly, you might be off and frolicking in a foreign land, or somewhere very cozy and warm, preferably naked.

This week offers good insight into what his 2023 can look like, and now is an excellent time for manifesting. Prompt him to dream big and to take his own heart’s desires seriously because if he doesn’t, no one will.

This is a good week for cozy dates, dates in nature, s’mores, warm sweaters, and hot chocolate. Bring the taste of childhood and the absence of worries to him, and he’ll be the most grateful man to ever live. The Capricorn man doesn’t need much to feel happy and lucky to be alive.

The Promised Land Is Here!

The final week of 2022 kicks off with a Super New Moon in Capricorn. This is great news for the Capricorn man because this is his time to shine – now is the time for him to put all his thoughts, wishes, and prayers into a coherent state.

He doesn’t lack a strong working ethic, he’s a hard worker who is patient, meticulous, and dedicated, which is why you should prompt him to dream bigger and freer. He’s been shy about his own success his entire life, now the time is due for him to grow into his big boy shoes and chase those big dreams of his.

Not only will he have a physical glow-up, but his heart and smile will stretch beyond measure. This is a perfect time to boost his confidence, be by his side, and enjoy the warm glow his heart is emitting right now.

Go on dates and do something he wants to do, something he likes to do, and something that will inspire him to take action in the direction of his dreams. Even if it is one step at a time. Celebrate the new 2023 together with big hopes and dreams, and don’t forget to kiss hard when the clock strikes midnight!

And there you have it, my darling readers. What do you think? I think that it’s not often for the Capricorn man to have a moment to shine. This is his five minutes of glory, and if he’s smart, he’ll turn it into 50.

This month puts him in a good mood, and he is ready to laugh, live and love, and thus, the only thing he needs is a loyal partner by his side who will boost his confidence and feed him some Christmas cookies from time to time.

The third week offers the best possibilities for dates and some alone time, but the entire month of December is unexpectedly good for the Capricorn man. Enjoy it together.

I sometimes hear from readers that while these Horoscopes are helpful for their romantic lives, they crave more detail and more specificity for them. This is totally understandable, and I have figured out a way to make sure you get all the information that you need to take advantage of transits and to know what pitfalls to avoid.

I’ve created a spot here where you and I can talk personally about your own concerns and how to best create the relationship that you have been waiting for. I love talking to my readers and getting to know them as people – and truly, what have you got to lose? Connect with me here.

Wishing you love and light on your journey.