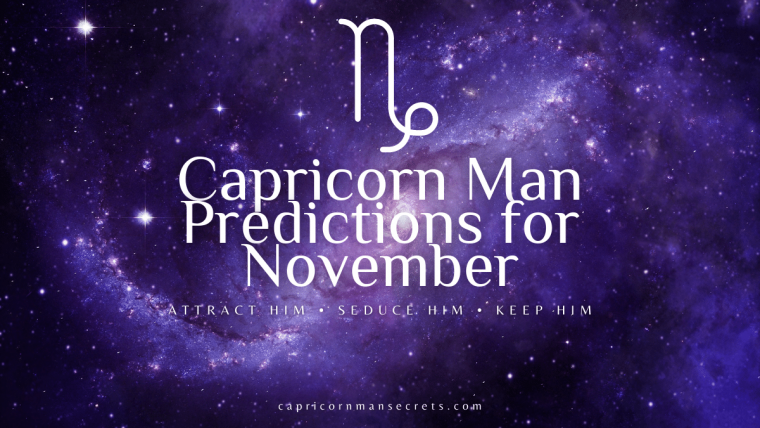 Hello, my darling readers, how are you? I hope you weathered the Retrograde Season well and safely, and that you’re ready for the next round of predictions. Yes? Great, let’s go!

The first week of the month might be socially (and financially) intense for the Capricorn man. But, as far as romance goes, he’ll appreciate something spontaneous and intellectually stimulating at this time. Think about watching a gritty documentary or a fiction movie together that deals with current social and agricultural problems…

The second week brings forth culminating energies and power struggles within the Capricorn man. It’s going to be his social life versus romance. He might feel like he’s stealing a part of life from someone at this point in time, he might experience imposter syndrome, or feel like he’s a burden. Now is not a good time for final decisions – instead, it’s a good time to get to the bottom of the matter, and deal with the consequences later.

The third week of November is good to start an activity (together) that will have long-term and positive consequences for both of you. Go along with his initiative and his plans. After all, he’s a Cardinal sign, and he knows what he’s doing most of the time.

There’s a Sagittarius New Moon on the 23rd, and this offers an excellent opportunity to nudge him to make plans for his goals. He can achieve a lot with hard work, but now is a great time to show him that not everything requires a Saturnian approach to things, some things can be done via the Jupiter route, teaching him the mysterious ways.

At the start of the month, the Capricorn man will find himself on the other side of the window, gazing inside a warm and busy shop (figuratively speaking) – his eleventh field of social encounters, friends, and teamwork is heavily highlighted with the stellium consisting of Mercury, the Sun, and Venus.

This stellium is closing in a square to his ruler, Saturn, in his second house on a very malefic degree. So, it’s very possible that the Capricorn man will suffer some financial loss thanks to lousy teammates, or because he feels obliged to help, even when it’s not his moral obligation.

This is a socially and, thus, mentally tense aspect for him, and he’ll have subconscious stress during this time. But, at the same time, he might gain some very serious and powerful friends during this period. People will notice his grit and integrity and decide to invest their money in him.

It’s a good time for spontaneous and intellectual dates; something that will not be too expensive, and yet it offers the opportunity to go deep into philosophical, technical, and religious topics. The Capricorn man will find intellectual stimulation very sexy at this point in time, and he’ll enjoy dearly the company of a well-spoken and literate lover.

Eclipse Season – The Season Of The Witch

The second week kicks off with a Full Moon Eclipse in Taurus, the Capricorn man’s fifth house of fun, romance, and pleasure. At the same time, the Eclipse forms a strong opposition to the stellium in his eleventh house, so this can mean that some matters, like his romantic life versus his social (charitable persona), are going to clash.

This is not a good opportunity to spend time with his friends or to “interfere” in his social life. Instead, it’s a good time for private conversations, meetings in secluded places, and having fun solo, just the two of you.

It’s up to him to decide what’s more important to him at this time, and where his energy and focus need to go. His communication game is not at its peak, considering how both of the rulers of his third house are in it, and Retrograde.

This is a good time for him to review his words, opinions, and standpoints on certain charitable and noble topics. It’s also a good time to get a straight answer out of him about the course or point of your relationship. If you wanted to ask a burning question, now is the time to do it.

The third week brings the cooling down of the turmoil energies. His focus will turn toward philosophical and more optimistic themes of life, and his career will experience a positive turn. This ought to put him in a pleasant mood.

This week is good for public dates, candle-lit dinners, and old movies. He will also be called to action, thanks to the closing trine between Retrograde Mars and his ruler in his second house. So, don’t be surprised if he calls you out on a gym date or some such activity that trains the body as much as the mind.

This is a good time for him to simultaneously work on his profit ideas, as well as mind-muscle memory and connection. I’m telling you this so that you might fall into step with him more easily. It’s essential to at least appear as if you know what you’re doing, and like you’re agreeing with his current goals.

Give him a sense that you’re on par with him during this week, and make it seem effortless, or at least like you’re enthusiastic because, in the long run, the activities he picks out for the two of you can be very good for your overall well-being.

The final week of November holds a healing component for the Capricorn man, thanks to the Sagittarius New Moon in his twelfth house. This is a perfect time for him to plant the seeds of his ambitions, and to plan ahead with new vigor and enthusiasm.

His fears should be subdued right now, and his dreams will be on a positive and liberating note. This is a perfect time to show your support and encourage him if he doubts his skills or opportunities.

The Capricorn man is known for his lack of faith and belief that good things happen just because. So now it’s a good time to show him what it means to have faith, and how easily it is to manifest your dreams if you practice a positive attitude and faith that all will be well.

Take him out for dinner, and let him see you feeling cheerful, positive, and happy. Show him the meaning of belief in the Universe, and what it means to have Jupiter on your side. Now is not the time for doom and gloom; it’s the time for enthusiasm, positivity, and belief that all can and will be more than well.

The Capricorn man’s mood will be uplifting for most of the second part of the month. The first part of the months is reserved for (social) anxiety and unrest when it comes to his romance versus his social life.

The Capricorn man might be irritated due to other people’s lack of expertise or capability, but when is he not? Make him talk about it, listen to his woes, and then make him take on a more positive mindset and approach.

The final week brings an excellent opportunity for him to be enthusiastic and positive about his future ventures, plans, and ideas; show him how to be truly faithful in the mysterious ways of the Universe and uplift his spirits even further.

If you are still having doubts about the state of your Capricorn man or feel as though your relationship can use a little bit of a boost, then you might want to book a VIP consultation with me to solve your burning questions.

This way I can dig deep into your unique situation and you can come out on the other side feeling more connected than ever. I’ve reserved some spots for my readers, so if this feels like a call you need, book your consultation with me here.

Until next time, my lovely readers – I wish you all the luck in the Universe on your journey!